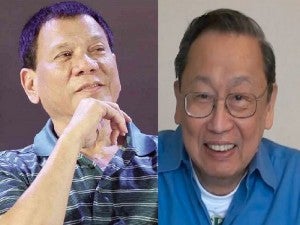 1. Why Duterte?
Sison: I do not endorse him as a presidential candidate. He has made himself the man to beat. You have to credit him for adopting the strategic line for arousing and mobilizing the electorate. He is for change and is against the rotten government, corruption and criminality, especially drugs. He has been effective in drawing the interest of the masses and mass media. His meetings are huge and he has charisma.

2. Describe Duterte as a student. Nag marka ba siya noon sa Iyo as a student?
Sison: I consider him as outstanding for joining the Kabataang Makabayan and enthusiastic in discussing national issues.
He was my student in Political Thought. I don’t remember him as getting high academic marks beyond 95 per cent.

3. Did Duterte promise you anything?
Sison: He promised to visit me as soon as he gets elected so that preparations can be made for a ceasefire and for resuming the peace negotiations between the Manila government and the NDFP.

4. What will be the first thing that you will do when you set foot again in the Philippines?
Sison: I will have a big reunion with relatives and friends.

5. What is the one thing that you miss the most from home? From the Philippines?
Sison: Relatives and friends. And things like mangoes, buko and bibingka.

6. What happened to the initial support expressed for Grace Poe? Is this in fact a withdrawal of support to her by the Makabayan block?
Sison: The Makabayan Coalition continues to support Grace Poe. When I speak well of Duterte and take note of his effective campaign line and No. 1 position in the poll surveys, I am not endorsing him as presidential candidate. As such, he has taken good care of himself. As chief political consultant of the NDFP, I cannot endorse Duterte or the electoral processs of the ruling system but I can thank him for facilitating the release of prisoners of war in the custody of the NPA and further talk to him like any other presidential candidate about prospects of the GPH-NDFP peace negotiations. I would be glad to talk to Grace in the same way if there is any opportunity.

7. Back to Duterte, tell us what you think is the reason or the reasons for the widespread support for Duterte?
Sison: As I said at the beginning he was able to capture the sentiment of the people about the need for change and he has strongly opposed the rotten government, corruption and criminality. And he has a style of talking that entertains and engages his audience. Nearly all the time he has charisma or magnetism. Sometimes, there are glitches due to gutter language for which he apologizes.