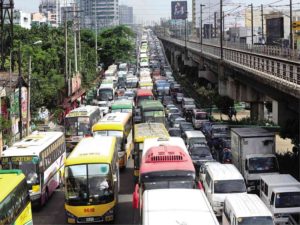 It is now very clear that the Senate and Malacañang will not work together and solve the daily “carmageddon” on EDSA.

After three years, nothing has happened in Sen. Grace Poe’s public hearings on the “experiments” of the Department of Transportation and the Metropolitan Manila Development Authority (MMDA) on EDSA.

Transportation Secretary Art Tugade proposed by legislation to become traffic czar and solve traffic in two to three years’ time. But Poe wasn’t satisfied with the list of projects and warned of possible corruption. This irked Tugade and President Duterte who said, “Then let Edsa rot.”

There are 1,039 days left under this administration, and I believe that more can still be done. My take is that we need only three things on EDSA.

First, government must take over (revoke, suspend) the franchise of all public utility vehicles (PUVs) to enforce real traffic discipline.

Second, there should be a realistic “unified traffic system” in Metro Manila, unlike the current one in which the MMDA focuses on national roads while local officials lord it over the streets in their areas.

Third, the organized bus route system launched by former MMDA chair Bayani Fernando on Edsa in 2006 must be revived. The program failed because of resistance from bus operators.

These three suggestions would work well with ongoing infrastructure projects to ease traffic on Edsa and C5.

The road also has a “special provincial bus lane” with a P10-billion food and bus terminal to rise at the site of the old Pandacan oil depot in Manila by December this year.

This terminal will allow 1,000 provincial buses and UV Express vans from NLEx or SLEx to unload passengers in Manila or ferry them to Quezon City or Makati City without passing through Edsa.

It will practically take the place of the existing 47 provincial bus terminals on Edsa. Private motorists from the north or south can also use this road instead of Edsa, with travel time between Balintawak and Buendia reduced to around 15 minutes.

Expected to be completed in June 2020, it will reduce by 25 percent traffic on Guadalupe Bridge in Makati and Bagong Ilog Bridge in Pasig.

For car owners, travel time from BGC to Ortigas and vice versa will be just 12 minutes, without having to pass through Edsa or C5.

I’m also watching the Southeast Metro Manila Expressway, or C6 that broke ground in January 2018 linking the provinces of Cavite, Rizal and Bulacan. The road will be linked later to NLEx in Balagtas, Bulacan. The new C6 will further help ease traffic on Edsa and C5 once completed in 2022.

Fortunately, some things are really moving forward despite mounting complaints. But today, the government remains inutile in instilling real discipline among PUV operators/drivers and private car owners on Edsa. If senators are not in favor of granting emergency powers to the President, what alternative solution can they offer to solve the monstrous traffic on Edsa?