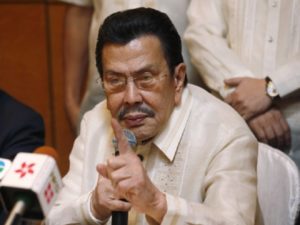 A Buddhist friend gave this interesting theory on why former President and outgoing Manila Mayor Joseph “Erap” Estrada and a lot of his family members lost in the May elections.

He says the former official did not fulfill his promise to complete the three-year tradition to honor the eight Hong Kong residents killed in the August 2010 Rizal Park hostage-taking.

After apologizing to the HK government in April 2014, Estrada promised to say an “elaborate Buddhist prayer for the souls of the departed” every July 15 for three consecutive years.

He did so that year and in 2015 but, in 2016, he reportedly refused to hold the very important “send-off to heaven” ceremonies.

My friend tells me this is the reason why eight politicians in the Estrada clan lost badly in the last elections.

The Criminal Investigation and Detection Group (CIDG) of the Philippine National Police (PNP) launched this weekend operations against illegal online sabong (cockfighting) in Metro Manila and different regions. A total of 99 people were arrested while livestreaming and recording on video the cockfights for online betting. There were 10 police operations conducted in the National Capital Region, Regions 1, 3 and 4, as well as in Visayas and Mindanao.

As a result, Manila Cockers Club Inc. (MCCI) closed its off-cockpit betting stations temporarily. In a statement, it says it has been identified as one of the subjects of the campaign against illegal online cockfighting.

MCCI assured the public that its operations are legal and in accordance with the law. Its stations have the required permits and, in January, the Makati Regional Trial Court Branch 149 upheld the legality of its operations.

However, Police Maj. Gen. Mao R. Aplasca, the PNP director for operations — through several directives — ordered the CIDG, regional directors and regional offices to strictly implement Presidential Decree 449 or the Cockfighting Law of
1974. The law limits the holding of cockfights to Sundays, legal holidays and fiesta celebrations for not more than three days.

It will be interesting to see the developments in the next days.

The race for House speakership must rise above reports of secret meetings, unmarked envelopes and promises of funding.

How will the new House speaker be respected if he was installed through vote-buying with payments ranging from P500,000 to P7 million? How will he fulfill the constitutional task of protecting our nation’s purse when he himself is corrupt?